Network To Get Work: Winning Job Search Strategies for the Reluctant Networker 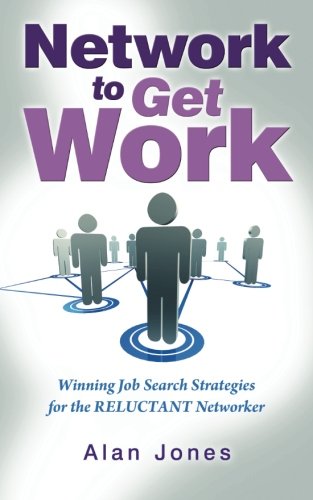 ‘Network To Get Work’ is not ‘about’ networking. It is for anyone seeking work who needs a clear strategy and sensible guidance on how to apply the principles of networking as an integral part of their job search campaign. If you are unsure about networking, and reluctant to involve your contacts in your job search, then this is for you. It’s well understood that we are more likely to find work through our network contacts, and it has always been easier to get a job while we still have one because we are not cut off from those contacts. To get work when unemployed is a real challenge as we so easily become disconnected, isolated and marginalised. In the great depression of the 1930’s it was common to see an unemployed person walking the streets with a ‘sandwich board’ declaring ‘Job Wanted’. Desperate times called for desperate measures and it was the social networking of the day. Today we don’t do that sort of thing – we join LinkedIn. Yes, social networking sites are the sandwich board of the 21st century, but it could be argued that it is neither ‘social’ nor ‘networking’. Because isolation, not deprivation, leads to long term unemployment our 1930’s sandwich board person knew that the best way to stay jobless was to remain invisible. So go ahead and join those networking sites but networking to get work is about much more than that. It demands that you communicate with flesh and blood human beings who have the power to change your life. Some job seekers are enthusiastic networkers who often become victims of their own extroversion, but most of us are reticent and reluctant to involve our friends and acquaintances in our quest for work. We need to find a common sense, easy to follow, step by step path that does not require us to take any actions that might make us feel uncomfortable or compromise our integrity. The ‘Network To Get Work’ approach has served thousands of job seekers well, as it will you.